How the original 1950s Rock styles remained strong through each decade!
(#3 of 6 parts) 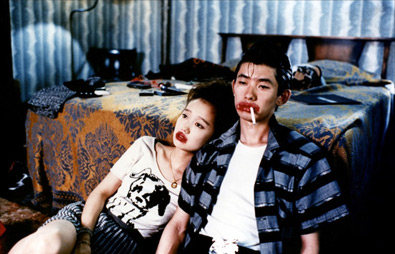 
Today, the story of how '50s Rock'n'Roll was revived in 1980s music and film!!
Hear an exhaustive music player, with worldwide artists maintaining the '50s styles from 1980 through 1989!


Spotify playlist title=
50's Rock disciples: '80-89
This is a Spotify player. Join up for free here.

The 1950s Rock styles continued in the '80s, evolving radically.

The original Rock'n'Roll styles of the 1950s -Rockabilly, electric Blues, Honky Tonk, Mambo, Cajun, and Doo Wop- became perennials that never stopped. Even with all the radical mutations of musics that followed, hardcore tribes still kept the original root sounds alive in the '60s and the '70s.

In the '80s, this roots underground became more rampant, propelling a spectrum of artists, from the traditional to the radical.

The Ramones; Pearl Harbor; The Clash

1950s Rock'n'Roll continued to undercurrent Punk music in the spillover to the '80s. Its reckless rhythms and delinquent sneer rumbles all through The Ramones, Subway Sect, Lydia Lunch, Pearl Harbor & The Explosions, X, The Clash, The Fall, and Dead Kennedys.

Since Ska had originally morphed out of Jamaican love of R&B, naturally the Ska Revival bands like The (English) Beat, The Specials, and Madness took it back to the roots at times.

It spread laterally through acolytes like Social Distortion, Husker Du, Joan Jett, The Smiths, The Delmonas, and Jesus & Mary Chain. The style of '50s Rock and the energy of Punk would lead to Psychobilly.

Black is back/ All In, we're gonna win

FM radio formatting (and, initially, MTV) continued to resegregate people out of the music they helped create, with the robot mantra 'Rock=white, Dance=black'.
(Short truth: everybody creates everything.)

Despite this closed-loop ignorance, defiant artists still echoed the sonic heritage they had every right to, with '50s styles glimmering in songs by Donna Summer, Joan Armatrading, The Spinners, Gary U.S. Bonds, and The Neville Brothers, as well as Howard Huntsberry's note-perfect portrayal of Jackie Wilson in the film LA BAMBA (1987). 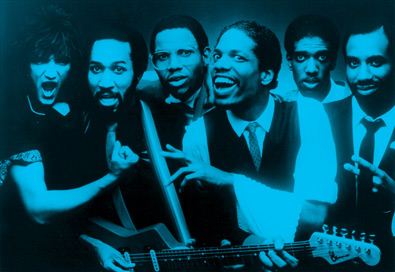 The BusBoys
If 1970 had been all about cultural inclusion, a decade of enforced division by FM Radio formats had resifted everyone into separate niches. Thus The BusBoys arrived in 1980 into a music system and marketed audience more segregated than any time since 1954. They turned this challenge into a mission to subvert every stereotype from every angle, from their mock-servant persona to their gleeful tear through music styles. In "Johnny Soul'd Out" they channel Chuck Berry to parody all imposed limitations. 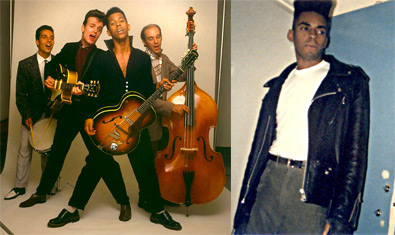 Buzz And The Flyers (photo by Mick Rock);
Colbert Hamilton
At the same time, Dig Wayne and his Rockabilly band, Buzz And The Flyers, sparked New York but lit up the Ted crowds best in the UK. (Dig went on to front the hit new wave/soul band, JoBoxers.>) London's own Colbert Hamilton And The Hell-Razors trysted the cats and kitties with their first single in 1984. By then, Barrence Whitfield And The Savages were rippin' it up and havin' a ball tonight going full-throttle Little Richard on their first album.

Little Richard himself would team with Fishbone and Living Colour; and Mick Collins of The Gories transmitted John Lee Hooker.

She's Gotta Have It

Cyndi Lauper; The Pretenders; The Ace Cats
Contrary to sexist narratives, women were a huge force in the original 1950s Rock'n'Roll. They continued on into all the various styles that evolved through the '60s and '70s in ever-exponential numbers, but were often thinned out from the herd of '50s revivalists.

But if someone is held out because of false limits, they will fight back by ignoring them.

In the '80s, rockin' women began reclaiming this aspect of their herstory. Heart and Girlshool had the boogie; The Cosmopolitans sassed from the garage; Cyndi Lauper first perfected her Buddy Holly hiccup fronting Blue Angel; The Pretenders never forgot to keep it real; and rockafillies finally infiltrated the Teds movement, and bands like The Ace Cats and The Dead Beats, or flew solo like Rosie Flores and Beverly Stauber.

This turf stake would expand in the '90s, and become a continent in the 2000s. 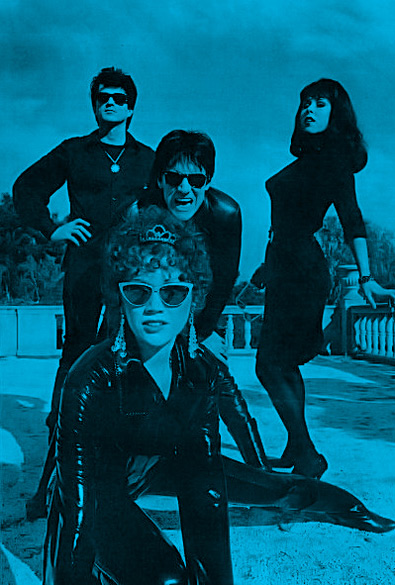 "The Cramps weren't thinking of this weird subgenre when we coined the term 'psychobilly' in 1976 to describe what we were doing. To us all the '50s rockabillies were psycho to begin with."
-Poison Ivy, of The Cramps


The Cramps may've sired Psychobilly sideways, but it quickly metastasized globally with Misfits, The Meteors, Guana Batz, and Batmobile.

Misfits; Demented Are Go
By the mid-'80s a Psychobilly scene stomped at London's Klub Foot, with acts like Restless, Frenzy, Styngrites, The Coffin Nails, and Demented Are Go. (Like the initial Teds revival, it started too male, which would gradually change.)

The blistering rush was paralleled by revivalists like Barrence Whitfield, The Milkshakes (with Billy Childish), and The Leroi Brothers; blues blasters The Paladins; and the garage of The Delmonas (with Ludella Black) and The Gories.

And of course true-school Rock bopped in the solo endeavors of Messrs. Lennon, McCartney, Harrison, and Starr.

By now '50s Rock was in the blood, carried on by Billy and Rocky Burnette, Rosanne Cash, Carlene Carter, and Hank Williams, Jr.

The boogie was in 'em, and had to come out of Heart, ZZ Top, Spider, Steve Miller Band, Little Feat, and Badfinger.

The PoleCats; The BopCats; The TeenCats
But some just wanted the original Rockabilly back as pure as they could distill it. In the early '80s a legion of coiffed, tattooed, slapbass combos dizzied up the dancehalls. Following in the suede shoes of the Teds and Robert Gordon, they mirrored the zest and flair of the psychobillies but with a more deliberately classic sound.

Carl Perkins once wailed, "Go, cat, go!", and now catalyzed a movement: thus prowled The Blue Cats, The Rhythm Cats, The BopCats, The Polecats (UK), The Teencats (Norway), The Ace Cats (Germany), The Go-Katz, Levi And The Rockats, and The Catmen loud and proud. 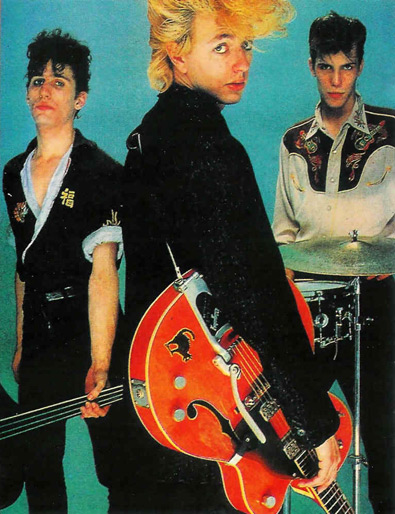 Also rockin' the bop till the sock hops sagged dragged and dropped were Les Forbans (France), The Shakin' Pyramids (Scotland), The Sharks, The Rattlers, and The Dead Beats led by Suzy May.

Rock has always trysted in the cross-current between the earthy and the alien, the organic and the eerie. One movement insures a parry. But for all the sleek sheen and chrome dreams of the sythethic scene, others pined for rust and dirt and soul.

Simultaneously, some artists shotgun-wed these roots forms to punk energy, in a trend loosely corralled as Cowpunk.

Bringing some throwdown to the hoedown were Tex(acala Jones) And The Horseheads, The Knitters (X in plain disguise), Lone Justice, The Textones with Carla Olson, Jason And The Scorchers, The Long Ryders, and the early k.d. lang.

These movements set the stage for Alt-Country in the early '90s.

Somewhere in the mania of Mink Deville, Alan Vega, David Byrne, The Gun Club, Tom Waits, The Birthday Party, Nick Cave And The Bad Seeds, 45 Grave, and the deranged Hasil Adkins, you can darkly parse the distorted shards of '50s Rock.

The original pioneers of Rock'n'Roll got a lot of respect due in the '70s and this reached a peak in the late-'80s.

The Million Dollar Quartet returned in 1985 for a new 30th anniversary album: Jerry Lee Lewis, Johnny Cash, Carl Perkins, with Roy Orbison subbing for Elvis. Jerry of course went and got a gun to hunt down a Rolling Stone scribe (because they had accused him of killing one of his wives).

A bestselling biography brought the Fourth Coming of Little Richard, who became ubiquitous on chat shows and record cameos.

Roy Orbison's "In Dreams" haunted David Lynch's BLUE VELVET (1986). (The film's eerie evocation of a late-'50s/early '60s-esque variant of the present day, with dream pop music, would be the template for 'Twin Peaks'.) It brought Roy back in a lavish relaunch album and special supported by famous acolytes, including U2, Jeff Lynne, Tom Waits, Bonnie Raitt, and Elvis Costello. 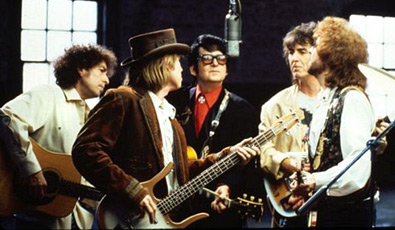 'Back To The Future' (art by Drew Struzan);
Lou Diamond Phillips as Ritchie Valens;
Youki Kudoh and Masatoshi Nagase in 'Mystery Train'
The '70s had remembered the '50s directly in films and shows, whether heartfelt or half-baked.

HEART BEAT (1980) simplified the true love triangle of Kerouac and the Cassadys. STREETS OF FIRE (1984) collaged all the styles from the '50s to the '80s into one parallel world. ABSOLUTE BEGINNERS (UK, 1986), featuring David Bowie, achieved the same through anachronisms about '50s Britain.

Conservative Americans in the '80s lived in a suburban sitcom fantasy of the 50's revived, that ignored the real tumult of either decade and specifically the progress of the '60s and '70s between. Hence Reagan and BACK TO THE FUTURE. (Relax, I'm not knocking your favorite movie, I like it, too. Bear with me.)

This clever time-travel movie connects 1985 to 1955 in an ancestral causal loop. Yes, we all like the movie..., (spoiler critique:) but saying a suburban '80s kid inspired Chuck Berry to invent Rock'n'Roll by way of Van Halen is a crime against culture on too many levels. No. Luckily, this bogus butterfly effect got its wings clipped when HAIL! HAIL! ROCK 'N' ROLL arrived in time soon to restore reality.

Just as Buddy Holly was immortalized for new fans with THE BUDDY HOLLY STORY (1978), the same happened for his friend Ritchie Valens with LA BAMBA (1987); the biopic featured Marshall Crenshaw (as Buddy Holly), Brian Setzer (as Eddie Cochran), and Howard Huntsberry (as Jackie Wilson), with a hit soundtrack ghosted by Los Lobos.

If the spectres of '50s gang pulps and films echoed in Francis Ford Coppola's adaptions of THE OUTSIDERS (1982) and RUMBLE FISH (1983), then the era was reflected directly with the magic realist timetrip of PEGGY SUE GOT MARRIED (1986).

And if the '50s had haunted the decade askance, then the ghost of Elvis literally haunts the modern Memphis of Jarmusch's MYSTERY TRAIN (1989), featuring Screaming Jay Hawkins, Rufus Thomas, and Joe Strummer.

With the overground success of Stray Cats, and all the underground experimentation beyond the margins, the '80s broadened the scope and depth of the '50s revival. In the '90s, these seeds would flourish in a new landscape of support for proud Revival acts.

-The Real History of Rock and Soul!: A Manifesto, A Handy Checklist

-CHUCK BERRY: The Guitar God and His Disciples

-BO DIDDLEY: The Rhythm King and His Disciples

-LITTLE RICHARD: The Voice of Rock and His Disciples

-JIMMY REED: The Groover of Rock, From Motown To Sesame Street