MY SOUL HAS BEEN PSYCHEDELICIZED: The Afro-delic Dimension of Psychedelia 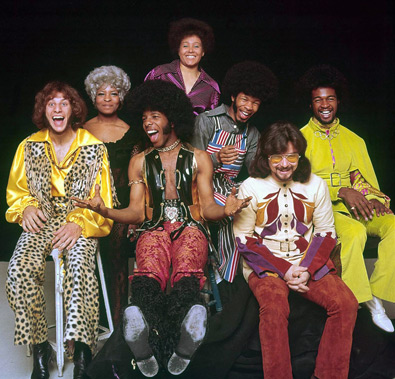 Sly And The Family Stone


"Now the time has come. There are things to realize."
-The Chambers Brothers


It ain't psychedelic unless it's all the colors. Here's some more of the Psychedelia story, told from some new sides.

Rock'n'Roll is only black and white on the page. In real life, it's a prism. Everybody was part of it, and in all ways. It's simple enough to define Garage rock as R'n'B or Blues riffs with much added fuzz and attitude. Or Psychedelia as the same gone more trippier and expansive. So it should be simple enough to include everyone who was doing that music. In real life, Jimi Hendrix, Sly & The Family Stone, The Isley Brothers, Black Merda, Funkadelic, and Miles Davis have as much to do with the Psychedelic era as their comrades Vanilla Fudge, Jefferson Airplane, Pink Floyd, The Beatles, and Janis Joplin. The books and the box sets won't tell you that, so I am.

The mainstream culture at large in the 60's was for the Included. TV ads/ shows, churches, schools, and industry were very good about reminding everyone what those parameters were, and how you did or didn't fit into them. But in the biggest generation ever, that left a lot of ostracized people to meet each other and bond together. Ban The Bomb activists, Folk protesters, Rock hedonists, Jazz hipsters, ecologists, vegetarians, Civil Rights rebels, student uprisers, international dissidents, disillusioned soldiers, young college women, banned writers, progressive teachers, pacifist clergy, migrant workers, repressed voters, gays, starving artists, fashion forwards, philosophers, poor people...the list was limitless. By sharing common grievance they began to see an end to limitations when they pooled their strengths. That's the real 60's...the Empowerment Era. En masse, their alienation created a sub-nation, a counterculture. It's mantra was freedom, in the sense of stripping away artifice and making art out of personal truth.

Revolt into style; that had been Rock'n'Roll in 1955. But by the mid-60's there were now so many styles it was united mainly by a philosophy: do what thou wilt shall be the whole of the law. For every person who ever felt alienated, put down, pushed out, invisible, freakish, or misunderstood, this was revolutionary. The outlook of inclusion made the world a theatre of the possible.

Jimi Hendrix was infinite. He was cubism, looking from all angles for a fuller view. Your one thing was only that. He was past anyone's petty limits like the river, like rainwater, like the wind. His first cover song was Dean Martin, his first concert Elvis, he was there in the Seattle club when The Kingsmen inverted "Louie Louie" into garage rock, he supported soul acts while soaking up Dylan and the Beatles, Lenny Bruce and Miles, comic books and Bradbury. He watched even bad guitarists to learn from their mistakes. He was a mosaic man, African and Irish and Cherokee, was modernity itself. He was an intersection for the past and the future, for the organic and the electronic, the gypsy and the astronaut, for abrasion and elegance. He was the fulcrum for all things to come.

Jimi always got fired. Three gigs in, the Soul headliner would get shown up by his guitar show-outs and out he went. Greenwich Village and then London gave him wider range to play in. The Chambers Brothers were doing alright singing blues and gospel on the folk circuits, but they had this one crazy electric song that lit up crowds while shorting out record execs. Dylan went electric heretic too and the time had come. Tune up, plug in, rock out.

It's all about interchange and inner change. Culture is an intersection of ideas, constantly meeting and mutating. All input is welcome so don't be put out. Exchange and change with it. "Got To Get You Into My Life" was a response to Stax Records. Jimi donned his first Edwardian coat and afro after Dylan's "Blonde On Blonde". Keith Richards envisioned "Satisfaction" as an Otis Redding song with his guitar subbing for the horns (which Otis returned in kind with his cover version). Sly Stone was a San Fran DJ who actually drove ratings up for his soul broadcast throwing in Lord Buckley skits, The Beatles, and Classical pieces; he produced the hits "Just a Little" and "Laugh Laugh" for The Beau Brummels, and The Great Society's original version of "Somebody To Love". The first band Neil Young was in had Rick James as the singer. Char Vinnedge loved The Beatles, but the more she heard Jimi the more fuzzed out her band The Luv'd Ones got. "Sgt. Pepper" was the moment George Clinton knew his charade of trying to be the Temptations was through forever. Motown itself schismed the day producer Norman Whitfield started churning out psychedelic masterpieces in response to Sly. That's Duane Allman roaring out the mighty licks behind Aretha on "When This Battle Is Over". Billy Preston would become the Fifth Beatle, fueling "Get Back" and "Don't Let Me Down" with his keys; and the Sixth Stone, with "Doo Doo Doo (Heartbreaker)" and "Melody". HAIR, "The American Tribal Love-Rock Musical", destroyed the color line on Broadway, and every taboo about sexuality, nudity, language, dissidence, and musicality with it. Visiting America, Fela was as radicalized by the politics of the counterculture as he was by the beats of James Brown. After the technicolor smorgasbord of the Monterey Pop Festival, reality had become a sampler buffet for everyone to enjoy together. 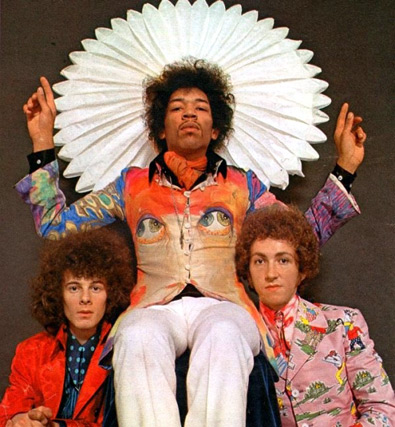 From Monterey '67 through Woodstock '69 that cross-fertilization was like a global hothouse of creativity. It rolled over into the early 70's, but something changed. Popular acts in the mid-60's had all been played side-by-side on AM stations. Then FM allowed college stations a new bandwidth for extended and experimental music. All very expansive and inclusive. But in the wake of Woodstock, the counterculture nation were now seen as a marketing pool. FM radio then re-segregated the audience by specifically dividing Hard Rock away from Heavy Soul through the 70's. Even though Santana, Miles Davis, Sly & The Family Stone, The James Gang, Mandrill, Blood Sweat & Tears, Funkadelic, Chicago, and Billy Cobham were playing variants of funky jazz rock, they were divided on radiowaves by Commercially-enforced, racialized programming. It interrupted the culture by blockading the intersection of ideas. This polarized the audience, helped seperate the movement, and left us with the segregated, Marketing police state of radio today.

Here's my middle finger upside their face. I say that this no longer gets to dictate the narrative of Rock'n'Soul. I say, "Oh bondage, up yours! I'm putting The Rotary Connection back in. And here's Edwin Starr telling warmongers to kiss his ass, and here's peach and maple girls from HAIR singing 'White Boys are so damn yummy and Black Boys are delicious'. Oh I got something for ya, here's Funkadelic rocking 'Funky Dollar Bill' harder than Sabbath. Or when they backed co-writer and singer Ruth Copeland. How about The Bar-Kays' 'Black Rock' LP on Stax? Social commentary? I got Marvin Gaye's 'What's Going On' album and The Last Poets and Curtis Mayfield. Here's Marsha Hunt jamming with Deep Purple with a fro bigger than my loud mouth. Here's Merry Clayton doing her own blast on the 'Gimme Shelter' she dueted with Mick on...oh wait, where are you running to, Radio? Trying to hide behind the CD Archivest? Well, here's crazy-ass stuff from Chubby Checker, Nina Simone, and Betty Harris. Whatcha gonna do now? Now the time has come. There's no place left to run."

Okay, I didn't really say that. But I'm telling you, and between all of us en masse we can get this party started back right. My outlook is inclusion and to me this world is still a theatre of the possible. I'm not alone. We are surrounded by children of the revolution everyday. The Afrodelic pioneers I'm championing are the fathers and mothers of P-Funk, Earth Wind & Fire, Betty Davis, Bob Marley & The Wailers, Bad Brains, Afrika Bambaataa, Was (Not Was), Tom Tom Club, Prince & The Revolution, Terence Trent D'arby, Living Colour, Fishbone, 24/7 Spyz, Public Enemy, De La Soul, The Jungle Brothers, A Tribe Called Quest, Lenny Kravitz, Neneh Cherry, Soul II Soul, Pop's Cool Love, Arrested Development & Dionne Farris, Digable Planets, The Family Stand, Cree Summer, Meshell Ndegeocello, Erykah Badu, Kelis, Joi, Most Def's Black Jack Johnson, Robert Randolph & The Family Band, Galactic, India.Arie, and Nikka Costa. Shoot, I'll run my mouth off on it all day, you think I won't? (Just wait till I scare the hell out of you with my tsunami about Funk music.) Rock'n'Roll is only black and white on the radio. In real life, it's a prism. We might get burned up by the sun, but we had our fun.

It's not Psychedelic unless it's all the colors. Let's kick out the jams, Brothers and Sisters!