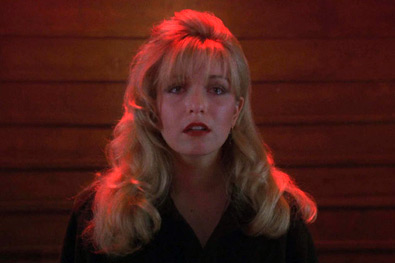 ROCK Sex says "That gum you like is going to come back in style."

Today, a riot in the streets or a tumble in the sheets? Here's a song full of secrets both sexy and dangerous.

It started with a dance in the late-'50s called The Stroll; crowds would line parallel while couples vamped spontaneous dances in the walkway between them. This was often done to easy shuffles like Chuck Willis' remake of the perennial blues, "C. C. Rider".

A Canadian quartet called The Diamonds had a huge hit on the trend with "The Stroll", turning it into a sensuous slow-grind with raunchy sax and an air of menace underneath.

Guitarist Link Wray was jamming with his band to work out an instrumental take of "The Stroll" for a live gig. They emphasized the grinding edge and came up with a new original which was a smash with the crowd, who demanded they play it five times. Link punched holes in his amp speakers to replicate that live buzz when it came time to record it.

It is the only instrumental ever banned on the radio because of conservative fear that it would trigger gang riots! Instead, it unleashed a style riot that never ends. The song is hailed as the dawn of feedback and distortion in Rock music, opening the way for Garage Rock, Heavy Metal, Punk, Industrial, and Grunge later.

Adam Ant and his great guitarist Marco Pirroni modified the "Rumble" riff for their own song of menace.

"Rumble" is the spiritual and sonic father of this song by the acclaimed composer Angelo Badalamenti for the soundtrack, TWIN PEAKS: Fire Walk With Me (1992). In the film, troubled teen queen Laura Palmer gets into a night of debauchery in The Pink Room, a dangerous backroom in a sleazy bar. (The room portends the hinge to The Red Room, the ultimate crux of the TWIN PEAKS series.) 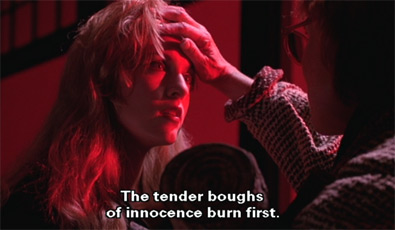 *****NOTE:
If you are new to TWIN PEAKS, watch the original two TV seasons first, and then the follow-up film TWIN PEAKS: FIRE WALK WITH ME after them.
[Then watch the new series, TWIN PEAKS: THE RETURN (2017)].
Though the film is a prequel, it is deliberately meant to be seen after the first two seasons for dramatic context.*****

-TWIN PEAKS: The Music And Its Inspirations!, with 5 Music Players

The BIG PAYBACK: Thank you, Aaron! 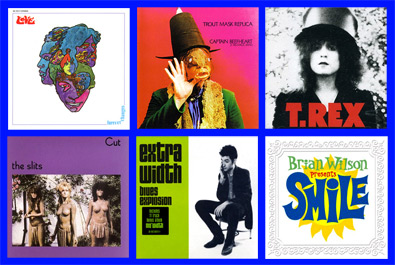 Music can change your life. Here's two music players and a story to prove it.

A friend is a door to more. They open up your life.


The two tricky things in life are money and access. A lot of times, without one you don't get the other. I spent much of the '80s reading about albums I couldn't hear, flipping through LPs in record shops that I couldn't buy. The library, the radio, and music videos were my best friends (being free and all), until I started working at record stores to feed my habit. 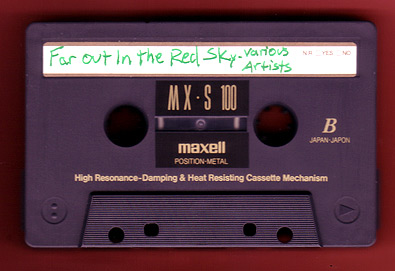 In the early '90s a record store amigo named Aaron started giving me mixtapes. He was pulling together lots of stuff I'd heard tangentially or just heard about. They came with great titles like "Far Out In The Red Sky", "It Used To Be Alright But Things Got Strange", and "Trailing On Next To Sick". Cornucopias of Agitfolk, Garage Rock, Dream Pop, Psychedelia, Glam, German Prog, Punk, PostPunk, Shoegaze, Grunge, Neo-Psyche, and Noize.

Aaron had that core understanding...that everything was related, interconnected and ever-evolving through hybrids. In pinball fashion the songs linked the '60s through to the '90s. They were new universes looped through plastic and magnetic tape. 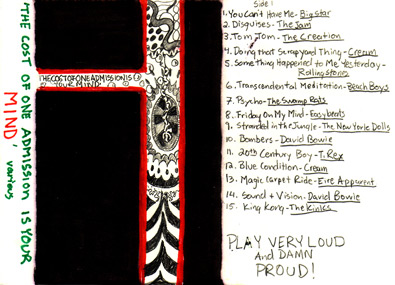 Aaron drew gothic Beardsley-esque covers for each, and wrote extensive liner notes in pencil. Another born culture maven and archivist! His knowledge for a young person was astonishing, guided of course by his boundless enthusiasm. Thank god for those folks.

Whenever I hear The Creation, Captain Beefheart, Brian Wilson, Syd Barrett, The MC5, Marc Bolan, Mudhoney, Bikini Kill, or Jon Spencer, I give a silent thanks to my friend for the gift.

Aaron's mixtapes opened up my mind and expanded my life. I want to thank him for that on his birthday, and pass the songs on to you here. Listen to the music player above and free your mind. 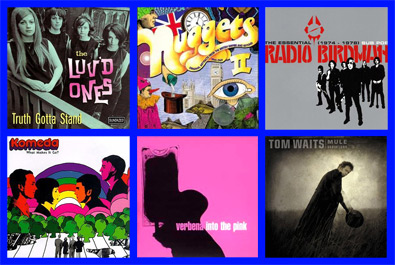 But every door leads to windows!

Here is another music player of bands and songs that I then explored on my own over the years to the present, all in the sonic spirit of the vistas Aaron opened my doors to.


A splendid time is guaranteed for all! Open up a friend and pass it on...

"You heard the words of Aaron
He spoke the truth in these things
Both great and small"
-The Move, 1971 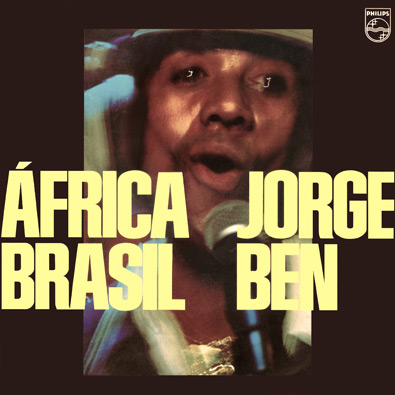 ROCK Sex gets the ball and runs with it.

Today, a culture relay from Funk to Samba to Electro to Indie Rock to Thrash Metal.

Brazil's Jorge Ben Jor made a Funk homage to a soccer star with his song "Ponta de Lanca Africano (Umbabarauma)" in 1976.

The song began (like all things) as a cross-cultural hybrid, this one between Brazilian Tropicalia and West African rhythms with some decided U.S. Funk swagger. A prime influence was The Minister Of New New Super Heavy Funk, James Brown, as evidenced by the rhythmic groove of this classic example.

Jorge Ben's lyrics homage "Umbabarauma/ an African point man/ ...a man whose mind is made up."

The song was made more internationally famous in 1989 when it was the spotlight hit on David Byrne's Brazilian compilation album, "Beleza Tropical". A striking animated video helped drive its success.:


In England, it morphed into Big Beat Electronica in a mash-up with Graham Central Station's "Now Do U Wanta Dance" (1977).

Imperial Teen, a kind of indie supergroup based out of San Francisco, used the rhythm guitar lick as a departure point for their own stellar song, "Yoo Hoo". The song was used in the film Jawbreaker, and star Rose McGowan appears in the song's video:


SOULFY, a Thrash band that Brazilian Max Calavera formed after Sepultura, did a hard-crashing cover of it that extended its fame.

It came full-circle to Brazil with this funky collective.

"Run, kick, find a hole, thrill and give thanks
See how the whole city empties out
On this beautiful afternoon to watch you play"

THE BIG PAYBACK: Thank you, Greg

"I'm the Antenna
Catching vibration
You're the transmitter
Give information!"
-KRAFTWERK 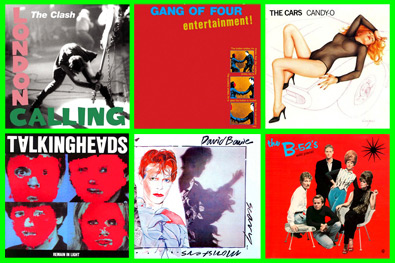 Someone always wanders into your life and changes everything. When it's for the better, we should thank them.

My friend Greg expanded my whole musical outlook. We were teenagers in a remote, conservative area circa 1980. Greg was a mischievous lunatic who would do anything without any qualms.

While I was recoiling from the slick corporate music scene into The Beatles and counterculture politics, Greg was the first to embrace Punk and New Wave. This seemed at odds, but Greg exposed to me to a range of new stuff that was advancing off of what I already loved. 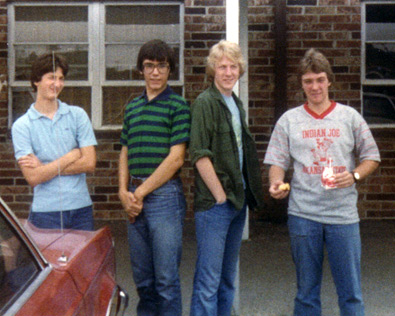 These were the real Indie years.

You could only see Rock acts on late night shows, sometimes. Magazines were few and cost too much. I taught myself the history reading back issues of Rolling Stone for free at the library. Verrry few Punk and New Wave acts were carried by major labels, and were promoted haphazardly at best. No college radio shows yet, no clubs, no tour circuit, no video channels, and almost no press, just obscure ads in fanzines and word of mouth. Bands were putting out indie records, but you had to mail-order them on pure faith, an impossible expense for most teenagers. Where I was, in the rural outskirts, everyone was still trying to process or erase the '60s, and this new '80s futurism stuff just seemed like evil alien shadows on the far horizon.

That's why Greg loved it. He went to all the little record stores and somehow ordered all of these. The few majors and many of the minor labels. He was ahead of the curve on everything. Whatever tore open the envelope, that's what he had to do.

The Clash. The Cars. The B-52's. Elvis Costello. Split Enz. Plastics. Gary Numan. Gang Of Four. The Jam. Talking Heads. Punk and New Wave and PostPunk and Psychobilly and Coldwave and Power Pop. Usually before they had been labeled.

We watched the new acts on maverick TV like "Saturday Night Live", the stellar "SCTV" from Canada, or most often on "Fridays", the L.A.-based competition. When Split Enz performed "I Got You" on "Fridays", it was the exact moment where my ambivalence faded and I was converted entirely to the new breed.

Sadly, my friend has passed on. To honor him on what would have been his birthday, this is a music playlist of all the wonderful music that Greg expanded my life with. When I hear these songs, Greg is eternal and as fearless as ever.

Thank you, my friend, for enriching our lives.

"Electric angel rock and roller
I hear what you're playing"

"By day we run, by night we dance, we do
I'm in love with the coming race
I've got the best, I'll take all I can get
I'm living for the Eighties"