How the original 1950s Rock styles remained strong through each decade!
(#4 of 6 parts) 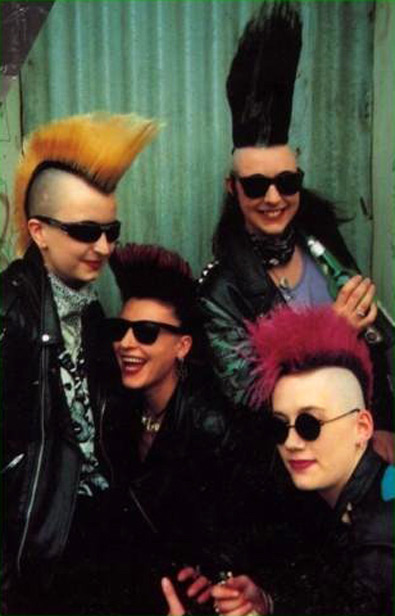 Today the story of how 50's Rock thrived more than ever in '90s music and film!!
Hear a massive Music Player, with worldwide artists maintaining '50s sounds from 1990 through 1999!

Spotify playlist title=
'50s Rock disciples: '90-99
This is a Spotify player. Join up for free here.

The rebirth of Rockabilly in the '70s and '80s exploded exponentially and experimentally in the '90s.

The original Rock styles of the '50s -Rockabilly, electric Blues, Honky Tonk, Mambo, Cajun, and Doo Wop- became classic forms continually revitalized, usually in deliberate spite to the prevailing trends of the eras that had followed.

They were the basic psalmbook underlining the '60s, the reformist manifesto galvanizing the '70s, and the gnostic gospels revolting in the '80s. By the '90s they became sacred texts for the heretical to go antithetical.

The Rockabilly renaissance of the late '70s seeded new indie record labels like Rollin' Rock, Fury, and Nervous. At the same time, reissue labels rose like Rhino, Cherry Red, and Bomp, bringing classics back to print and supporting new acts in the retro spirit.

This branched into the '80s with Ripsaw, Goofin' (Finland), and ABC's "Stomping At the Klub Foot" compilations of the UK psychobilly scene; parallely, with retro sounds on edgy indie labels like Sire and I.R.S.; and spiritually with roots labels like Malaco, Alligator, Hightone, and Rounder.

By the '90s, this fertilized a wide indie ecosystem that now included labels like Norton (run by The A-Bones), Raucous, and Pollytone; supporters of trashabilly deconstructionists like Sympathy For The Record Industry; and premier reissue labels like Ace (UK), Bear Family (Germany), and Sundazed.

With labels, a club tour circuit, package festivals, college radio, and fans to support them, retro revisionaries had an underground alternative to bypass and survive the mainstream. Rock'n'Roll had started as a rebel music on an ocean of independent labels in the '50s, and had come full circle.

The Blue Cats; Betty And The Bops; Nervous Fellas

The classic sound of Rockabilly continued its new spring.

The reunited Stray Cats and Robert Gordon furrowed further, now followed by upstarts like Catmen, The Quakes, The Jets, Kitty Little, Colin Winski, The Frantic Flattops, Bob And The Bearcats, Betty And The Bops (France), The Rockats, and The Rattlers.

Fear Of A Fair Planet

"...beat is the father of your Rock'n'Roll
Rock with some pizzazz, it will last
Why, you ask?
Roll with the rock stars you'll never get accepted as." >
-Public Enemy, "Bring The Noise" (1988)


The original Rock'n'Roll started as a polyglot revolution from jump, made by eclectic styles and faces reacting to each other, and then quickly mirrored back planetwide. Inclusion is the vital heartbeat of Rock (and culture, and society), and exclusion has always been death to progress.

Creativity is an intersection of ideas, involving everyone and ever changing. It is fluid and inclusive, not static or exclusive. No one has a lock on anything, and every one has something valid to add. The moment someone claims total claim, in the name of tradition, culture, or as a 'group'... they are wrong. Their limits are their own. Always feel free to progress past their regression.

So it didn't matter if marketed radio reinforced bigotry and segregation in music, because creative people flow past all phony barriers by nature. They can never be stopped, any more than ocean currents. Maligning the color-line signs, ignoring the bouncers, and crashing the club were iconoclasts like Jessie Mae Hemphill, Garland Jeffries, The Gories, Colbert Hamilton, and Lavelle White. Listen to Boyz II Men honor the traditions with their Doo Wop tribute "In The Still Of The Nite", or Public Enemy abstract Carl Perkins inside out on "Go Cat Go".

Rock'n'Roll had quickly ignited Spanish-speaking countries from Spain to the Americas, especially in the early 60's. And this wildfire still churned in the 90's with El Vez The Mexican Elvis, Los Lobos (and their spinoff, Latin Playboys), Rock'n'Bordes, Los Renegados, Mermelada, The Blazers, and The Texas Tornados.

The Girl CAN Help It

Anyone who counts women out of Rock history is an idiot. And thankfully they've always been there to set the record straight with their own records.

The psychobilly boys klub finally got some needed ass-kicking by women like Something Shocking, The Dypsomaniaxe, and Psycho Bunnies.

Worldwide, the classic sound rebounded with The Shillelagh Sisters (UK), Kitty Little And The Roamin' Toms (UK), The Queen B's (UK), The Dots (Canada), Betty And The Bops (France), and Toini And The Tomcats (Norway). By decade's end -with the scene becoming a global community- Rosie Flores, Lena Marie And Hey You Playboys, Candye Kane, Tasha And The Enforcers, Kim Lenz And Her Jaguars, Marti Brom, and Josie Kreuzer brought more stomp to the bomp.

And The Midnight Dynamos deserve special spotlight for their brave and sweet ode to "Hayley", the queen of the hop.

And how many variations on The Johnny Burnette Trio's yelps, barnstorm rhythms, and clanging riffs -namely "Train Kept A-Rollin'" and "Rock Billy Boogie"- can you count on the Music Player? Wait'll you get to the 2000s and the 2010s...

The '80s had explored electronic music in the main and out to the fringe, reflecting the era of futurism. But this ensured the countermovement to the organic, the passionate, the historical. Thus the early '90s backlashed against the synthetic and the slick with the raw and the revolutionary, with Grunge, Riot Grrrl, and Conscious Rap. And Roots (and World) musics also unrolled more soul into the CD age.

Honky Tonk rebooted with Junior Brown, and Country Boogie kicked with Asleep At The Wheel, High Noon, and Big Sandy And His Fly-Rite Boys.

As a tonic to Grunge and atonal abrasion, many melodic musics of the past found revivals, like Surf, Ska, Lounge, Easy Listening, and Swing.

Rock'n'Roll had first swung out of the Jump Jive bands that succeeded '40s Swing Jazz, so the '90s Swing Revival became a swiveling cousin to the current Rockabilly bands. When Stray Cats went astray to different ways again, both styles found the perfect hybrid in The Brian Setzer Orchestra.

Some wanted to bring the same level of shock, danger, and abrasion to Rockabilly that it had when it was first heard. They deconstructed and reconstructed it with trash, noize, tribal, and wailing textures.: psychobilly, trashabilly, tattoos, property damage, arrests, etc.

The Cramps, The Paladins, and Thee Headcoats brought it through the Garage.

Kryptonix, Dexter Romweber, and The Deadly Snakes thrashed it in the Trash.

And the unhinged continued to make doors where there hadn't been.

"Well, there's little ol' Suzie turning 17
But everybody knows her as the Rockabilly queen
And there's ol' Slim, quiet as a mouse
He grabs ol' Suzie, they'll tear up the house!"
-"Rock Billy Boogie", The Johnny Burnette Trio (1956)

Off in his own zone, Hasil Adkins had been banging out clamor on rare singles or home tapes since Rock actually started. He was rediscovered by Norton Records and set free to derange the new faithful with clatter, growl, and cackle.

And then there's Dread Zeppelin: Led Zeppelin done reggae sung by an Elvis impersonator. Or The King, an Irish Elvis bringing the flares to current songs like Nirvana's "Come As You Are". (Sadly, his other version in Japanese wasn't available for the music player.)

And what can you say to artists who pummel every song to pieces with glee like Ministry (with guest Gibby Haynes), Bodeco, The Honeymoon Killers, Jon Spencer Blues Explosion, and P.J. Harvey? Other than, "That's them, your honor." 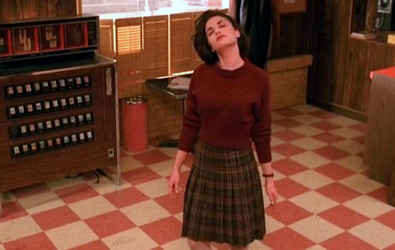 Audrey's dance in the RR Diner on TWIN PEAKS

There's the kitsch suburban dream impression of the '50s, and then there's the complex period of struggle and breakthroughs it actually was in reality. '80s films evoking the period struggled with these conflicting narratives (in a mirror of its own exact contradictions), and naturally the '90s films challenged these visions further.

In BLUE VELVET (1986), David Lynch had created a lumbering burg where the dusk of the '50s never quite faded. This took on deeper, dreamier, darker life with the phenomenal success of his series TWIN PEAKS, a timeless mid-century town where secrets bent back and there was always music in the air: especially Duane Eddy twang, Mancini bop, and the Girl Group sighs of Julee Cruise. Chris Isaak, on the same wavelength, brought the haunting shimmer to Lynch's WILD AT HEART (1990). And the post-series film TWIN PEAKS: Fire Walk With Me (1992) rumbled with Link Wray chords, Beat poetics, and heroin jazz.

THE HOT SPOT; THE IRON GIANT

The story palatte broadened. Robert Townsend echoed the early Doo Wop years of The Temptations with his parable THE FIVE HEARTBEATS (1991), as sung by The Dells. The early '50s music scene -including Jazz, R&B, and thus Rock'n'Roll- had been vitalized by Cuban Mambo bands, as fictionalized in THE MAMBO KINGS (1992), based on a Pulitzer-winning novel.

The public had now worked through its reveries on the 50's in twenty years of films, but -with generational turnover- it now moved on into the '60s (THE DOORS, THAT THING YOU DO) and the '70s (VELVET GOLDMINE, SUMMER OF SAM) through the decade. These films reflected revolutions in culture and ideology that had been kindled by the '50s.

But since the '50s was the spark of these rebellions, it still flickered through the flicks. PLEASANTVILLE (1998) attempts to contrast the current suburbia with the idealized '50s sitcom version, and posits itself as a liberating force. (The enjoyable BACK TO THE FUTURE films reflect this same blinkered view. Middle Class suburbia is actually a cartoon coccoon in any era, too sated with comfort to push for change, and oblivious that all social advances come from the less privileged outside of it.) More cannily, this is handled better in THE IRON GIANT (1999), the classic animated film by Brad Bird, in a compassionate allegory of freedom of choice vs. conformity and aggression. The better stance in any era is to face the ugly truths by challenging and changing them. Rock the present and roll forward.


The '90s indie labels and the explosive sales of CDs brought a new depth and range of support to the ongoing 50's Rock'n'Roll music revival. In the 2000s, more acts than ever would arise, but with new challenges in the digital music age.

-The Real History of Rock and Soul!: A Manifesto, A Handy Checklist

-CHUCK BERRY: The Guitar God and His Disciples

-BO DIDDLEY: The Rhythm King and His Disciples

-LITTLE RICHARD: The Voice of Rock and His Disciples

-JIMMY REED: The Groover of Rock, From Motown To Sesame Street