ROCK Sex: From HOWL to WISE UP GHOST: Allen Ginsberg > Elvis Costello and The Roots 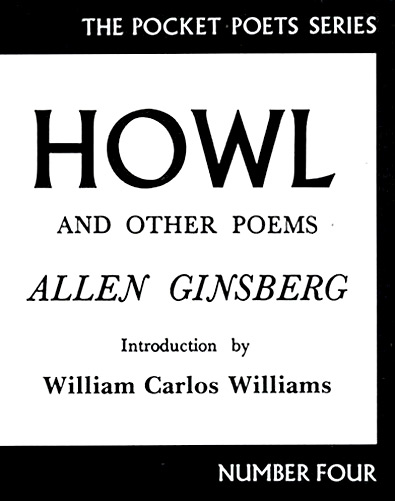 And here's Elvis Costello and The Roots giving tribute (2013). 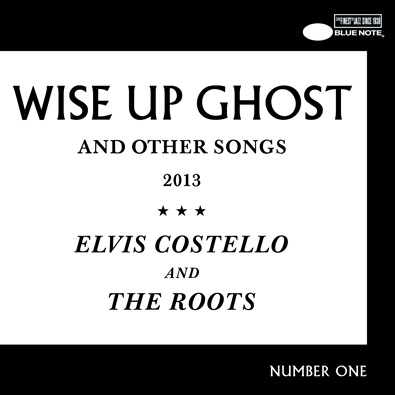 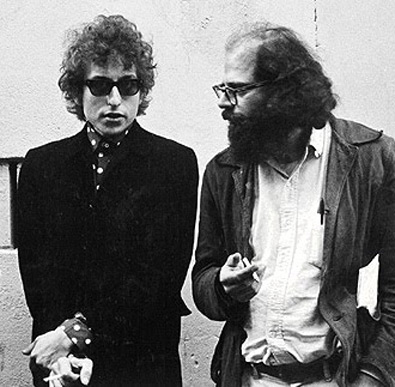 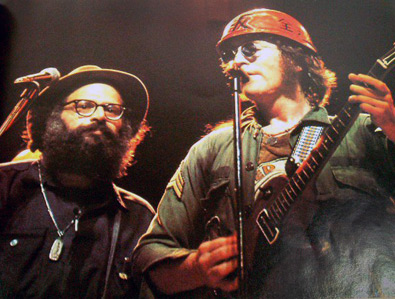 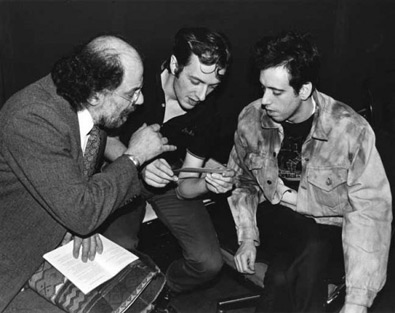 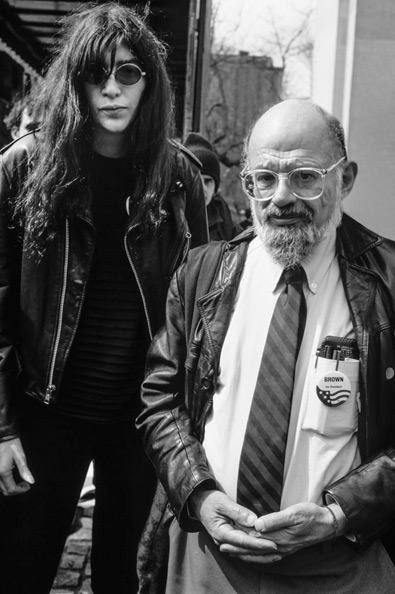 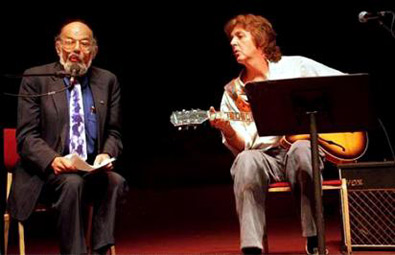 Posted by Tym Stevens at 5:20 PM No comments:


Hear hundreds of great Christmas,
Hannukah, and Kwanzaa songs,
all in order from 1947 to Today!

Spotify playlist title=
HAPPY HOLIDAYS!: Rock'n'Soul Playlist
This is a Spotify player. Join up for free here.
*(The Player is limited to the first 200 songs.
Hear the unlimited Playlist here.)

See Also:
-The Real History of Rock and Soul!: A Music Player Checklist

Posted by Tym Stevens at 7:21 AM No comments: 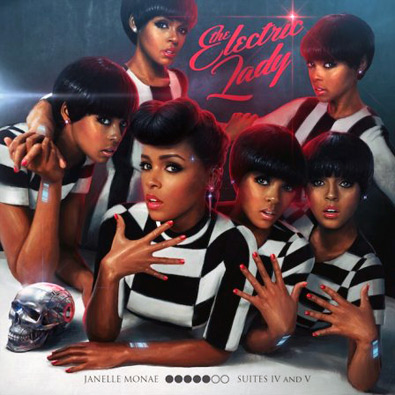 Janelle Monae's new album, THE ELECTRIC LADY, expands her Sci-Fi opus about an android sent to save humanity. Besides continuing themes from the classic silent film Metropolis (1927), the title alludes to the album "Electric Ladyland" (1968) by The Jimi Hendrix Experience. 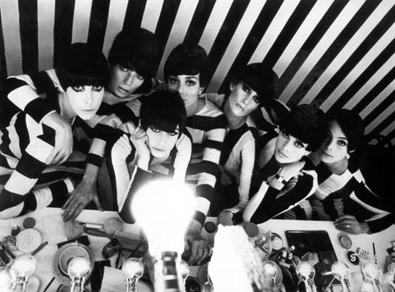 The cover art is a direct homage to a scene from the French film, "Who Are You, Polly Magoo?" (1966). This satirical film by esteemed photographer William Klein was a mock documentary about the fashion world which ridiculed its excesses, our voyeurism that empowers it, and the loss of real identity in an exploitative media.

In the scene above, supermodel 'Polly' (Dorothy McGowan, third from left) is lost in a sea of clones of real-life model Peggy Moffitt (far left). 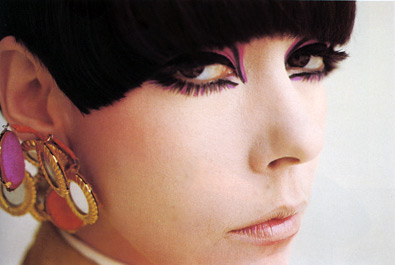 Peggy Moffitt is the most radical fashion model of all time.

In the Mod '60s, she created an andryogyne character in futurist kabuki makeup who, wearing the abstract designs of Rudi Gernreich, came to us from a world and timeline all her own.

Working with her husband, photographer William Claxton, Peggy approached the fashion shoot as a forum of conceptual art, challenging the viewers' preconceptions about gender, identity, consumerism, and modernity. 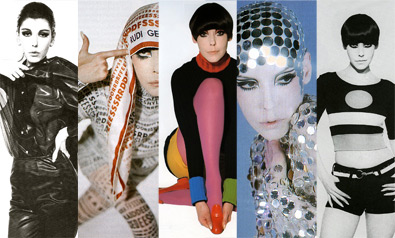 P E G G Y
M O F F I T T :
Her Influence On Rock'n'Roll Style
It's a safe bet that her influence on Rock'n'Roll is incalculable.

From David Bowie and Siouxsie Sioux and Soo Catwoman, to Grace Jones and Annie Lennox and Boy George and Robert Smith (The Cure), to Karen O (Yeah Yeah Yeahs) and Chicks On Speed and Janelle Monae, her revolutionary influence continues today.

And here's a video I made about her:

Famed Pulp magazine artist ALLEN ANDERSON whipped up a great idea, and he kept swinging great strokes with it! 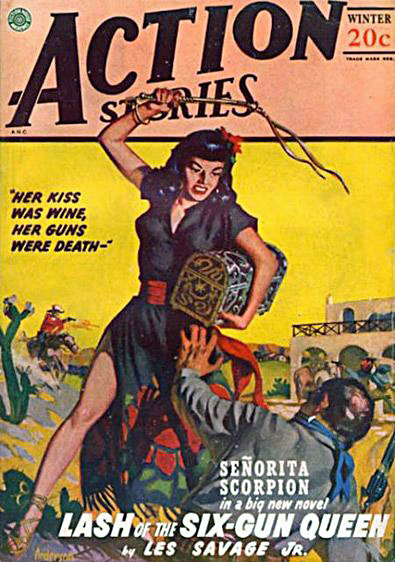 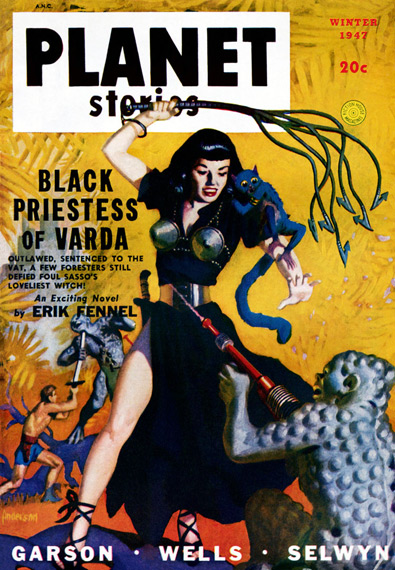 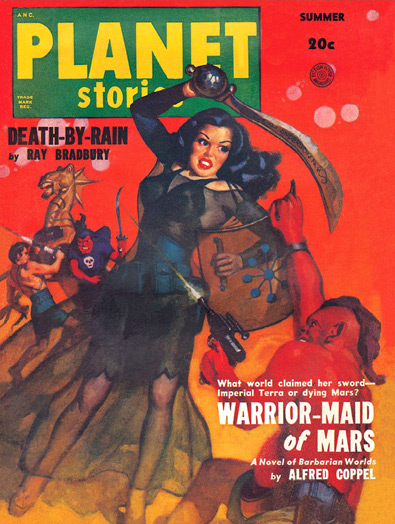 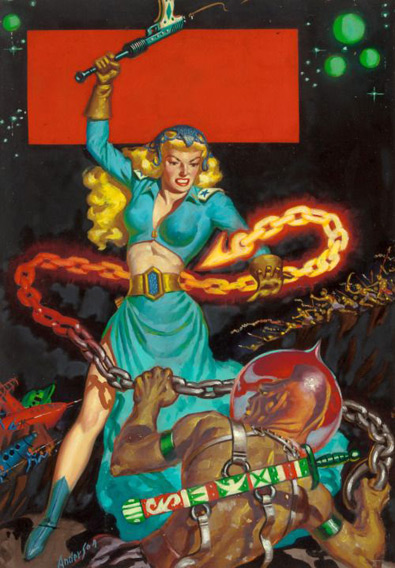 Posted by Tym Stevens at 2:00 PM No comments: