The Big Bang of STARSTRUCK: The Roots and Branches of Elaine Lee & Michael Kaluta's space opera

"I was, and am, a huge fan of STARSTRUCK,
which I think was one of the most brave and elegant experiments
in comic book story-telling."
-Clive Barker, "Hellraiser"
"Favorite comic book of all time? STARSTRUCK, by Lee and Kaluta."
-Mike Carey, writer; "Lucifer", "Hellblazer"

I N T R O
__________________________
STARSTRUCK is a raucous space opera created by writer/actor Elaine Lee and designer/illustrator Michael Wm. Kaluta. It has morphed from stage play to graphic novel, comic series to audioplay, and knows no bounds. For years, in its chimerical forms, it has delighted the daring and perplexed the piddling. It is a science fiction magnum opus where galactic gals boot you up the buttside, revolution is a rollercoaster, and slapstick flies higher than helium.

Smart and sexy, sassy and sacrilegious, STARSTRUCK is flat out more fun than your brain knows what to do with!

It began as a stage play in 1980 in the postpunk cuisinart of NYC. Lee and Kaluta then extended the mania into challenging adult comics for the radical HEAVY METAL magazine. Those stories became a graphic novel from Marvel Comics in 1984, who unwittingly accompliced a new mini-series through their mature imprint Epic Comics in '85. In 1990, the demented duo began revising and expanding these stories through Dark Horse Comics. Now, they are up to their subversion again; new remastered versions of these legendary stories have been released by IDW Publishing in monthly comics and collected volumes, with expanded art and breathtaking color by painter Lee Moyer. This was accompanied by an audio recording and a musical soundtrack of the stage play.

STARSTRUCK draws from a deep reservoir of cultural ideas and then spikes the kool-aid. It can be compared, connected, or coincidenced against many themes, genres, styles, and creators from before it, but it roils quite clearly on its own course. Wanna know Who and Where, and Why it's there? For loyal fans and new readers, this article will try to point out some of the parallels before and after it, to appreciate its beginnings and show how it helped forge the cultural future you live in.

Strap in and hang onto your keister!

The silhouette of STARSTRUCK's ship,
The Harpy, recalls the Buck Rogers serial poster.

"Buck Rogers" brought the solar system to Main Street. There had been "scientific fiction" novels before his debut in 1928 -like Mary Shelley, H.G. Wells, Jules Verne, and Edgar Rice Burroughs>- but Buck Rogers was the one who brought it into everyone's living room. First as a few pulp magazine short stories, then as the first science fiction comic strip ('29), the first sci-fi radio show ('32), and as movie serials ('39), and TV series ('50, '79). Americans were first exposed to a fantastic future, rocket ships, jet packs, killer robots, and rayguns through this swashbuckling futurist. Thirties pulps and Forties comics were flooded with Buck imitations from Flash Gordon and british Dan Dare to countless also-flews. 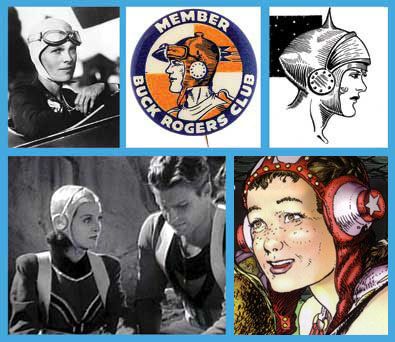 STARSTRUCK often homages the retro technology, clothes, and adventurous spirit of this big bang of modern sci-fi. Buck and his running partner Wilma Deering reflected the hero aviators of the time, like Charles Lindbergh and Amelia Earhart, with futuristic aviator caps and flight suits. They soared in art nouveau shuttles and sported ringlet laser pistols. Their universe was a playground of weird wonders and cliffhanger escapades, where danger just meant more fun. 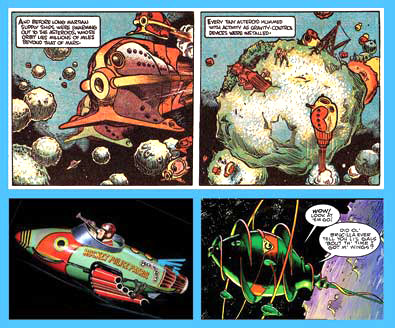 Artist Dick Calkins, and later Rick Yager, charted this future in ink. For the STARSTRUCK play, Michael Kaluta designed sets based on movie serial spaceships, with screens, piping, and levers. The silhouette of its spaceship, the Harpy, hearkens to the ship's shape on the 1939 Buck Rogers serial poster. The aviator-style cap is worn by hero Brucilla The Muscle. There are rayguns and art deco robots, corkscrew bullet ships, and flying cycles aplenty in the comic stories. 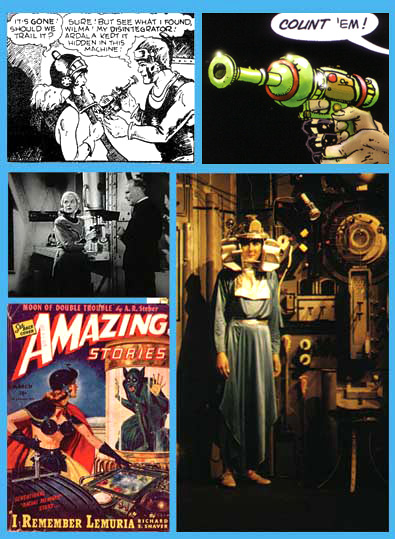 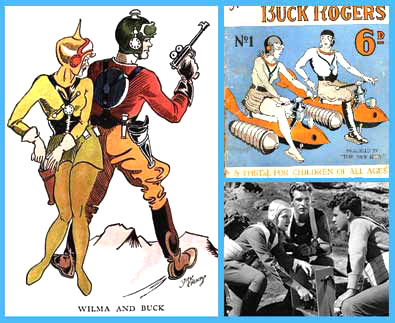 Wilma Deering is the template for the SF women that followed. She was bold, in charge, dressed like the men, and did everything beside Buck. She was the modern flapper girl now in the 25th century, leaving all the petticoats and parlors behind. Distaff buccaneers and evil queens now seeded the pop universe because of her, such as Dale Arden and Princess Aura from "Flash Gordon". The '40s publisher Fiction House, in its Planet Stories pulps and Planet Comics, had a knack for showcasing fighting SF women on its covers, particularly brash blonds with blasters like "Mysta of the Moon". Wonder Comics profiled "Tara the Pirate Queen", a spacefaring captain charting her own course. 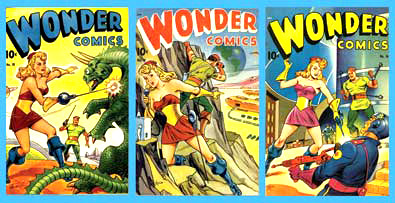 Many great pulp SF stories were written by Leigh Brackett, the queen of Golden Age Sci-Fi. The type of women she trailblazed clearly inspired George Lucas to homage them with Princess Leia Organa and her mother, Queen Padme Amidala, in the STAR WARS films. (Making the circle complete, Leigh Brackett helped co-write the screenplay for The Empire Strikes Back!) 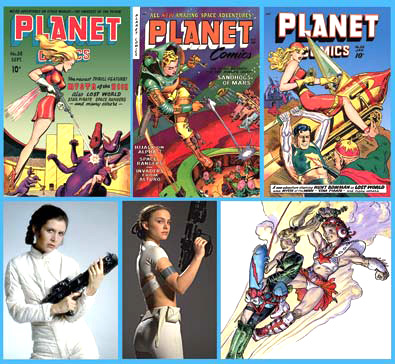 But where would the good girls be without the bad girl? If the good girls mentioned were women with the shackles off, bad girls were hellions with all inhibitions gone. If the good no longer needed permission to be full-range, the bad wouldn't even think to ask. The bad girls are secretly admired because they don't apologize for their desires. Even if they are in the wrong, that attitude is rather liberating, even if experienced only vicariously. 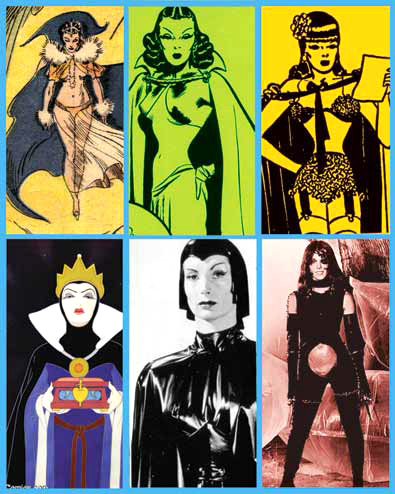 In the tradition of H. Rider Haggard's "She" and Burroughs' Queen La of Opar there were many powerful women in books, films, pulps, and comics.> Always, they were role fantasies based on people's fears or desires. They were as trapped or free as your outlook allowed.

An avowed feminist, Elaine Lee disregards broad slogans or absolutism, preferring to chase after picaresque characters with flaws and wills of their own. "You know, I've never purposefully set out to write a feminist story, or even a story with a strong message," she wrote in 1997. "It would be hard for me, as I tend to fall in love with all my characters, so that the bad guys never end up too bad...just misguided." 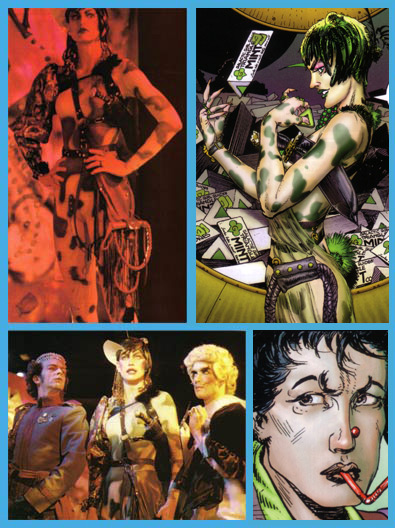 In STARSTRUCK, two women vie for villainesque. Verloona Ti, a vain and ruthless schemer with flamboyant class and sensual abandon; the two villain men, Kalif Bajar and Rah El Rex, become adjuncts to her. And Lucrezia Bajar, a.k.a. Ronnie Lee Ellis, the twin of Kalif who is both a famous SF writer and a vindictive schemer in her own right. The villains' machinations are motivated erratically more by personal faults than pure evil.

"The story isn’t always linear" says Lee. "Sometimes it’s funny, sometimes serious and sometimes a mix, depending on which character you’re following. We took a character like Kalif, who in the play came off as simply evil, and gave him a past - a sister who tormented him, a father who expected too much – and tried to show how he became who he became." With this comics expansion, his sister Ronnie Lee Ellis ended up becoming a crucial player in the crazed game.

This long trend of femme fatales in SF continues through the mercurial Catwoman, the Black Queen in Barbarella, Ursa from Superman II, Supreme Commander Servalan from "Blake's 7", the Borg Queen, Kai Winn of "Star Trek: Deep Space 9", Saffron on "Firefly", Irena on "Alias", T-X the Terminator, Bellatrix Lestrange from Harry Potter, Nebula from Guardians Of The Galaxy, and Missy on "Doctor Who".

Michael Wm. Kaluta is a master artist who is heir to the classical era of design and illustration. He channels little of traditional dynamic superhero cartooning (Jack Kirby, John Buscema), instead drawing from the deeper well of pioneers of art nouveau, art deco, pen illustration, pulp covers, french comix, and manga. STARSTRUCK lets Kaluta make puckish nods at all his inspirations. 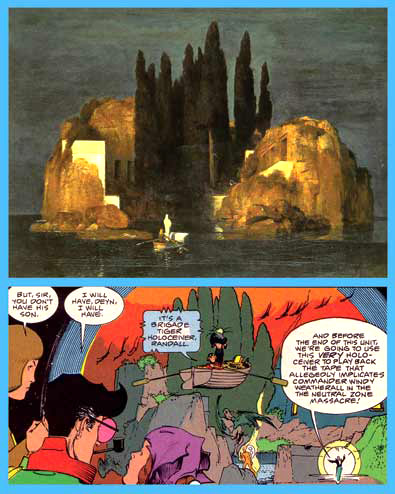 -The symbolist painting, "Isle of the Dead", by Bocklin gets a clever nod in a surreal boat sequence. 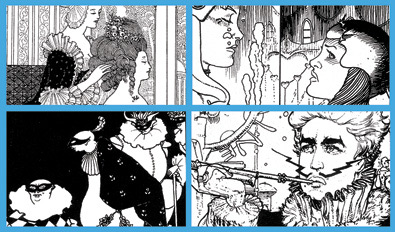 -Aubrey Beardsley can be sensed in two ways: the use of hard graphics with lyrical, patterned lines for mid-tones; and in lampooning the spoiled elite in their rococo masquerade clothing. The former can really be appreciated in Kaluta's fine work on the black/white version of STARSTRUCK from 1990. The latter can often be seen in schizoid dandy Rah El Rex, and courtesans of the corrupt Bajar family. 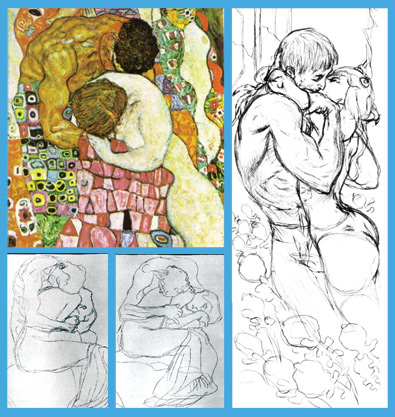 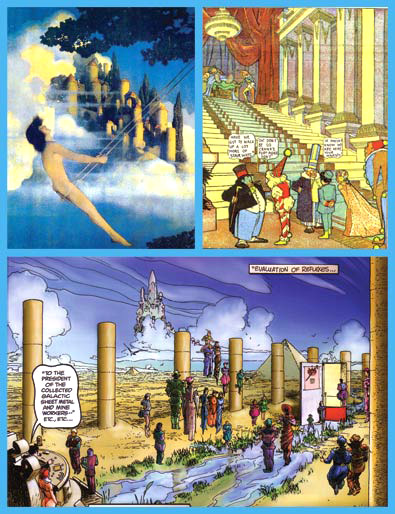 -The art nouveau cartoonist Winsor McCay ("Little Nemo In Slumberland") resonates in his use of wondrous architectural spaces. 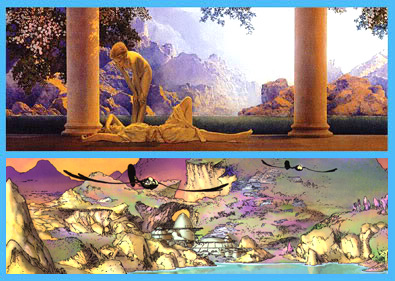 -Maxfield Parrish rings in his use of translucent light, lush panoramas, sense of harmonic balance, and strong idyllic graphics. Parrish also painted "The Dinky Bird" as an illustration for "Poems of Childhood" by Eugene Field. This book is quoted by Lee during scenes of Galatia 9's childhood. 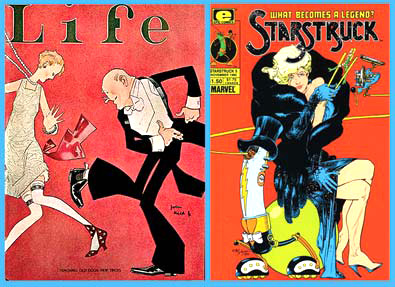 -John Held, Jr. specialized in balloonish cartoons for the art deco era. That frankfurter whimsy is captured in the companion droid, E-V. And there may be some of the deco-delic fancy of Rick Griffin's underground comix creatures there, too. 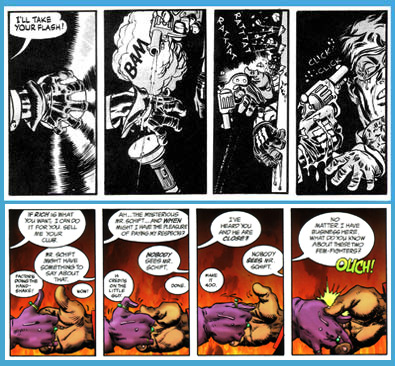 -"Anybody who doesn't think I've studied this Will Eisner fellow just hasn't looked at my work," Kaluta offers up front. Will Eisner created The Spirit, a sophisticated '40s series considered the Citizen Kane of comic art. His textured cities, theatrical shadows, use of sound effects, emphasis on storytelling, and deeply human characters are a major influence.

-As mentioned, Kaluta tributes the early futurist tech of Dick Calkins and Rick Yager ("Buck Rogers"). But also other grand strip cartoonists like the graceful storytelling of Hal Foster ("Prince Valiant", "Tarzan"), and the elegant drama of Alex Raymond (
Posted by Tym Stevens at 8:09 PM 4 comments: