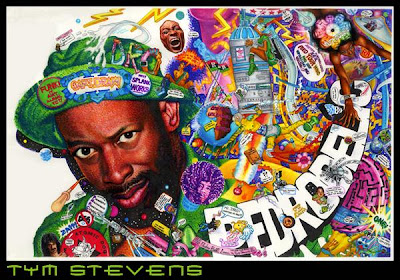 Let's set the record straight. There are three factors that made FUNKADELIC what it was: 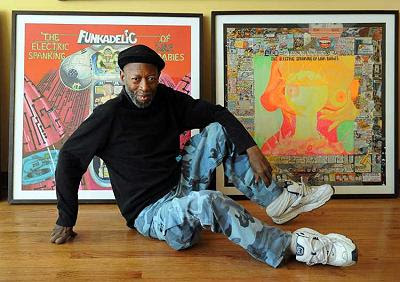 Funkadelic had been alarming/converting audiences for around four years before he showed up. Hindsight shows that in those years, between 1969 and 1973, they were trying anything and everything like they had nothing left to lose. Which they didn't since they were on an obscure label, an erratic tour circuit, and haphazardly building a odd cult of fans while being run out of towns.

Pedro was like many of those fans, a young person into the hothouse explosion of hybrid musics that gushed over from the expansive late '60s. Like the deepheads, he loved Frank Zappa, Captain Beefheart, Sun Ra, Sly Stone, Jimi Hendrix, The Beatles. He particularly liked the distinct and disturbing packaging of Frank Zappa albums. It gave a special identity to the artist and to the fans who dug it. It plugged you into your own special shared universe. So he sent elaborately drawn letters to Funkadelic's label with other samples. George Clinton liked the streetwise mutant style and asked him to do the COSMIC SLOP album cover in 1973.

That was the moment Funkadelic became everything we think about them being. 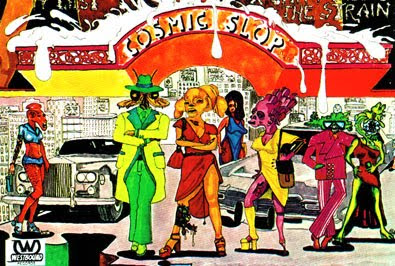 Before, Funkadelic used shocking photos of afroed sirens along with liner notes lifted from the cult, Process Church Of The Final Judgement. Very sexy, very edgy. But looking a bit too much like labelmates The Ohio Players' kinky covers, and reading like a Charles Manson prescription for apocalypse. A more cartoonish cover for the fourth album AMERICA EATS ITS YOUNG (1972) along with more coherent production and song structure was a new start. But Pedro chrystallized their identity to the world with that next LP.

In 1973, there was no MTV, no internet, no VCRs, no marketing strobe in all media. An act toured, they put out an album once a year, and they were lucky to get a TV appearance lip-synching a hit. You couldn't tape it and you were lucky to even see them. As a fan, almost your whole involvement with the band came through the album cover. It was big, it opened out in a gatefold, there were inserts and photos and posters. Sitting with your big ol' headphones, you shut off the world and stared at every detail of the album art like they were paths to the other side, to the Escape. Who were all those people in the SGT. PEPPER crowd?; what alternate reality were artists Roger Dean (Yes) and Mati Klarwein (Santana, Miles Davis) from?; why are the burning businessmen shaking hands?; is it an African woman standing or a lion's face?; does it say AMERICAN REALITY or "American Beauty" or both? 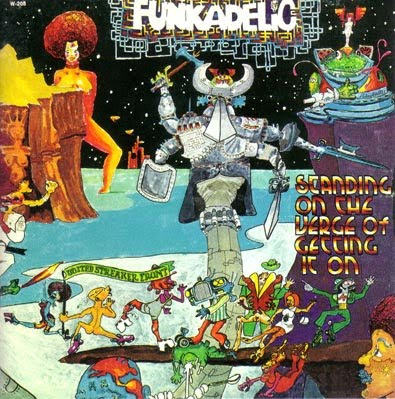 Funkadelic, STANDING ON THE VERGE OF GETTING IT ON (1974)

This was an art era for an art audience. Posters, T-shirts, LPs. These were your subculture badge of honor, your spiritual battle cry, your middle finger to mediocrity. They took every cent you had saved and were even harder to come by, which made it even more personal, more rebel. Your LP was a shield, your T-shirt was armor. They got you expelled, ostracised, beat up. They scared the living hell out of the straights around you...and you loved that. It reaffirmed your faith that you were into something good, something unique. 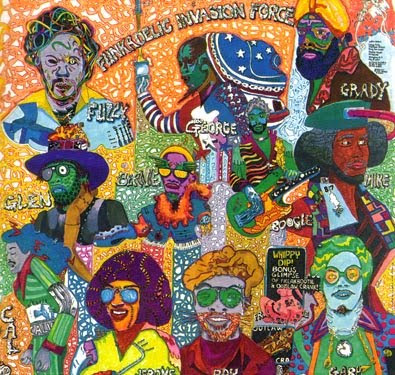 Interior art of Funkadelic from
STANDING ON THE VERGE

What Pedro Bell had done was invert psychedelia through the ghetto. Like an urban Hieronymus Bosch, he cross-sected the sublime and the hideous to jarring effect. Insect pimps, distorted minxes, alien gladiators, sexual perversions. It was a thrill, it was disturbing. Like a florid virus, his markered mutations spilled around the inside and outside covers in sordid details that had to be breaking at least seven state laws. 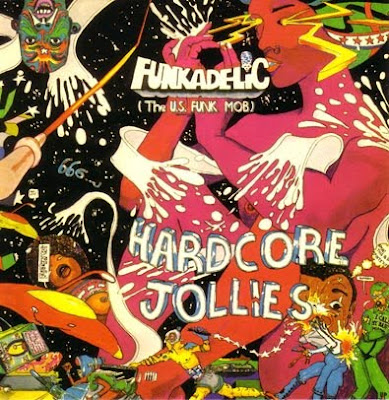 More crucially, his stream-of-contagion text rewrote the whole game. He single-handedly defined the P-Funk collective as sci-fi superheroes fighting the ills of the heart, society, and the cosmos. Funk wasn't just a music, it was a philosophy, a way of seeing and being, a way for the tired spirit to hold faith and dance yourself into another day. As much as Clinton's lyrics, Pedro Bell's crazoid words created the mythos of the band and bonded the audience together. 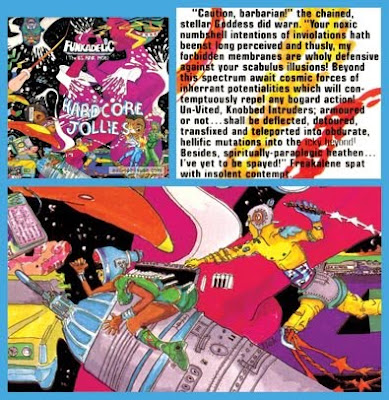 Half the experience of Funkadelic was the actual music vibrating out of those wax grooves. The other half was reading the covers with a magnifying glass while you listened. There was always more to scrutinize, analyze, and strain your eyes. Funkadelic covers were a hedonistic landscape where sex coursed like energy, politics underlay every pun, and madness was just a bigger overview. 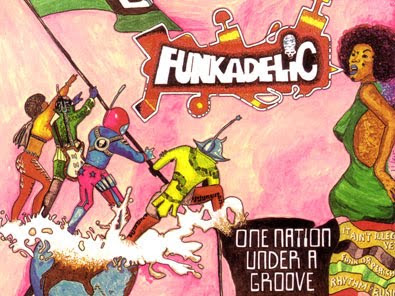 Detail from ONE NATION UNDER A GROOVE cover, Funkadelic (1978)

Pedro called his work 'scartoons', because they were fun but they left a mark. He was facing the hard life in Chicago full-on everyday with all the craft and humor he could muster. 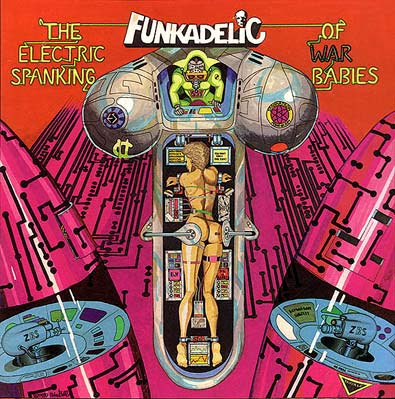 The uncensored cover for ELECTRIC SPANKING OF WAR BABIES, Funkadelic (1981)

Pedro's unschooled, undisciplined street art gave all the Suit execs fits, as when the cover for ELECTRIC SPANKING OF WAR BABIES caused such a scandel that it had to be censored before release. It also opened the door for all the great NYC graffiti artists of the late '70s, for the mainstream success of Keith Haring's bold line cartoons, and James Rizzi's marker covers and "Genius of Love" video animation for Tom Tom Club. 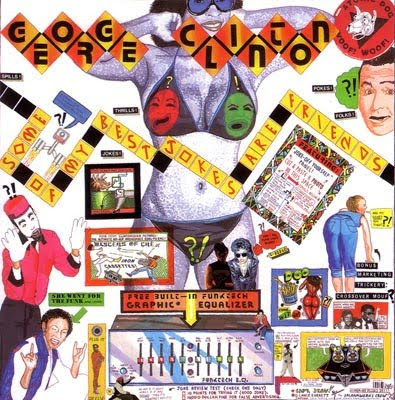 Cover for SOME OF MY BEST JOKES ARE FRIENDS, George Clinton (1985)

When Parliament and Funkadelic went on hiatus in the '80s, it was Pedro Bell's art that gave the P-Funk identity to George Clinton's albums like COMPUTER GAMES (1982), YOU SHOULDN'T-NUF BIT FISH (1983), SOME OF MY BEST JOKES ARE FRIENDS (1985), and R&B SKELETONS IN THE CLOSET (1986); as well as spin-offs like Jimmy G And The Tackhead's FEDERATION OF THE TACKHEADS (1985), and his clay figure art for INCorporated Thang Band's LIFESTYLES OF THE ROACH AND FAMOUS (1988).

He also did a spectacular animated scartoon of his original character, Larry Lazer, which was broadcast on MTV.

By the early '90s the game had changed and not to Pedro's favor. MTV had turned every song into a jingle, and every album into a quarterly marketing plan. Every star's face was in your face every place all over the place, milking an album for three years until the next committeed go-round. CDs shrunk the album cover experience into a coaster. The days of swimming in your LP cover were gone. (But conversely Rock concert poster design exploded, as fans were desperate to have some great art to fill the void.)

During the decade Pedro continued soldiering on with the CD covers for P-Funk-inspired bands like Maggotron's BASSMAN OF THE ACROPOLIS (1992); FUNKRONOMICON for Bill Laswell's all-star funk collective, Axiom Funk (1995); and Enemy Squad's UNITED STATE OF MIND (1998). And of course for George Clinton's DOPE DOGS (1994),"TAPOAFOM (The Awesome Power of a Fully Operational Mothership)" (1995) and "Greatest Funkin' Hits" (1996); and P-Funk's "HOW LATE DO YOU HAVE 2 B B4 U R ABSENT?" (2005).

In the meantime his style was homaged/appropriated/bit by other artists designing for Digital Underground, Miami Bass groups, and dodgy Funkadelic compilations. But he received better due with a great write-up in the countercultural art magazine Juxtapoz (#16, Fall '98). He also had a couple of his Funkadelic covers in Rolling Stones' "Greatest Album Covers Of All Time" issue. 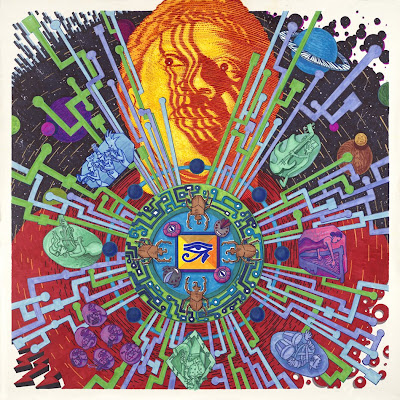 During the '90s Pedro started having health difficulties, including issues with his vision. He worked with a few friends to get his creations out there to the world. One such project was this recent fine art print of Sun Ra, based on a layout he first came up with in the '70s.

Pedro Bell is still with us, but having some hard times. Though he basically 'branded' Funkadelic's entire identity, he has seen little for it financially. In a just world, Pedro would get the Juxtapoz treatment like Robert Williams and Robert Crumb and the like, with coffee table books, T-shirts, posters, figurines, and hip retrospectives in galleries. But bad faith and ill health have prevented that.

Nowadays, awake and aware young people who are sick of the packaged machine that music has become vehemently reject it. They embrace adventurous musics from before The Slickness, wear vintage weathered T-shirts, and hang LP covers on their walls as art objects. They want it rough, real, and wide open again with weird possibility. It's these brave new souls who need to free their minds with Pedro's kaleidoscopic visions.

Pedro Bell is an unsung genius who deserves his place in the sun. Let's give it up for our Brother From Other!

This essay has been quoted extensively, without credit, on George Clinton's website and in Rolling Stone.